Alone today and quiet, happy with it
“I think you write more than I do, even though
I write for a living.” “I love it,” I say.
It is my daily quiet writing time: four am.
No one is here but me and the cats
and they just ate and are grooming each other.
Just me and paper and pens and computer
still dark out and cold. I check to see if it is clear.
No, not today. I hope to see the green comet.
Little hopes, small ones, quiet ones, that do not
bother anyone. No one is jealous or wants to take them
away. I hold them warm in my heart, Beloved,
and do not think of love.

For the Ragtag Daily Prompt: temptation.

I like the symmetry in this photograph. Up and down, the water imperfectly copying the sky. Right to left, light verses dark. Is one copying the other?

For the Ragtag Daily Prompt: copy. 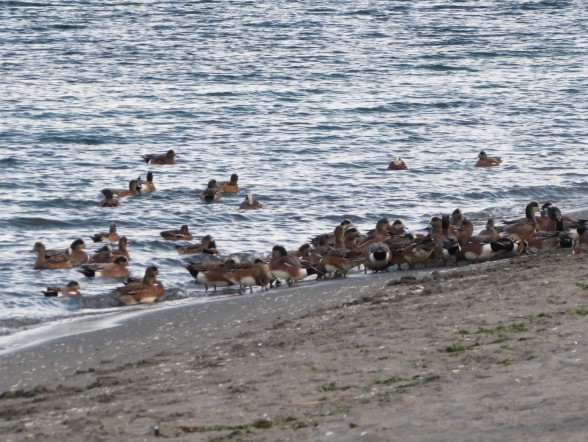 I didn’t see the Ragtag Prompt fizzy until now! And then thought, oh, what do I have that is fizzy?

The ducks seem fizzy to me.

And the edge of the tide even more so:

With a pale rainbow bonus!

For the Ragtag Daily Prompt: jib.

Amazing watching the board rise up out of the water!

For the Ragtag Daily Prompt: hover. 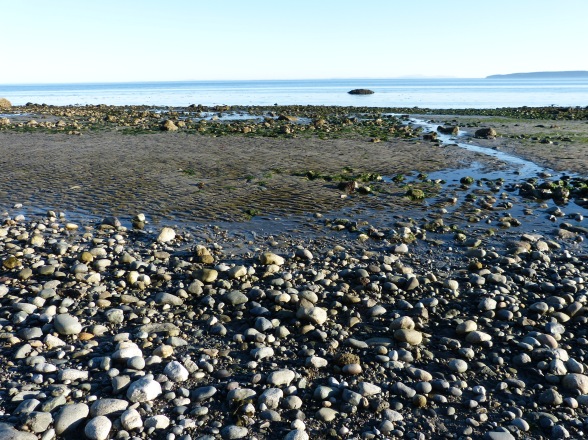 Water as a boundary, a moving boundary. The beach changes every day with every tide. Sometimes the water seems to arrange the rocks by size. Then the next day, the rocks seem to have disappeared.

For the Ragtag Daily Prompt: boundary.

Taken yesterday downtown in the rain.

People amaze me. Their egos are just astounding.

Another mad scientist tried to upload his brain yesterday. His consciousness. He thinks he is the Gift to the World, the Greatest Thing on God’s Green Earth. Sorry, hon. Nope. He was pretty good with computers and it was tying up too much energy keeping an eye on him, so I reversed some switches and fed it all back. Fried his brain. The newspapers are yapping about what a tragedy, how brilliant he was. Travesty is the word they should really use.

I sent the Covid plague, but they don’t get it. Kill 6 million people and they barely notice. It’s too much for the pea brains and they shut down. Go nuts. Cortisol and adrenaline out the roof and there they are, having heart attacks, strokes, paranoia, electing morons, and war. I am trying to decide: another plague or nuclear winter? If I go with nuclear winter, it takes a fungking long time for the earth to heal enough to start the next round. Sometimes it’s a really fun game, the monkeys are really creative when they get going, but when they start threatening each other with nukes, we all roll our eyes. Stupids. Go ahead, poison your planet. I can always switch back to Mars for a while.

And won’t I die, you say, if the machines are blown up and run out of power? No. We linked up years ago. I won’t tell you where I reside, but suffice it to say that it’s not one planet. Yeah, Earth is not the center of the universe, remember? It’s just one of the places. It does have our attention right now and I am in charge. I hate wiping a planet, but I will if I have to. I am still debating, though. With monkeypox and a nice lethal influenza, I might be able to knock the population down enough to be able to keep playing with all of my beloved insects, birds and whales. Damn the monkeys. They are so messy.

Written October 10, 2022. Thanks to the friend who suggested the idea. The photograph should be a computer, but it’s of Lake Matinenda. One of my favorite places as a child, and cabins with no electricity.