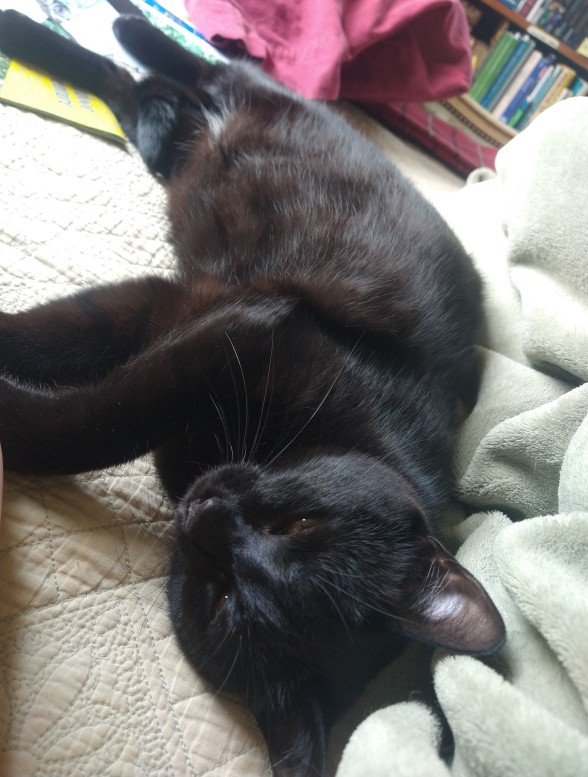 Black things on the bed.

For the Ragtag Daily Prompt: capricious.

I want to get remarried. Add that, Beloved, to me wanting someone to love and to love someone.

And that is what I now want. Thank you recent ex for showing me what I want.

I want to be myself from the start.

I want to notice bullshit and walk away before we get involved.

I am not your shrink, you are not my shrink, and if one of us needs a shrink, we should find one.

I want to notice lies and walk away before we get involved.

I want to speak up if you tell me lies, or I want to back away for good.

I want to be loved and I want to love. By the same person, damn it.

Hear my prayer, Beloved. Hello, universe. Here I am.

Elwha is the most “Rub my belly” cat that I have ever had. And he is perfectly happy here.

YOU thought I said “Fish face.” Fish faces came up at the wedding.

When my son is a baby, he goes with my husband for a well child check. I am in residency and can’t get away. The doctor asks, “Can he play patty cake?”

“No,” says my husband, “but he can make a fish face.” My husband has a long narrow face. He pulls both ears out and purses his lips. He wiggles his ears.

My son has a small godson. They have mostly said hi on zoom. My son has taught his godson to make a fish face. When they visit in person, he makes the fish face and his godson’s face lights up. Oh, this is THAT person and they are REAL, not just on a screen!

Whew! I finished the AprilAtoZ blog challenge even with a wedding and not just a wedding but MY SON’S WEDDING on April 30th! Extra challenging. Two weeks before April 30th I started working on two posts a day, working backwards from the end of the alphabet and forwards from where I was. I set them to post on the appropriate days!

I have until May 7 to write a reflections post, but not today! I got home at 5 pm and it has been terribly exciting and rather complicated too. Weddings during covid turn out to be challenging, but my son and my new daughter are a delightful pair. I said that she has been a daughter for a long time now and she says that she felt like my daughter the first time that she got two pairs of wool socks in her stocking at Christmas….. That has become a family tradition.

Hooray for weddings in spite of pandemics! This one was postponed twice but is now complete! Blessings on everyone and thanks.

Dolly the Dinosaur shows evidence of a respiratory infection: aka a “cold”. And a chronic cold. She died at age 15, about half way through her lifespan. I suspect a little guesswork there. Do old dinosaurs turn grey?

There are dinosaur bone changes in Dolly from chronic infection. The scientist posted photographs on the internet and other bone experts said, that is infection. That is evidence of respiratory infection. “A lot of the times when any disease or trauma is found in a dinosaur skeleton, it’s often in limb bones where you expect it to happen,” Dr Poropat said. “Seeing it where the air sacs penetrate the vertebrae in a sauropod is quite unusual.” Also, she didn’t die of volcanic ash: “Inhalation of volcanic ash can cause a disease similar to mesothelioma.” Who knew? I haven’t kept up on my dinosaur medicine. The pattern of lesions also didn’t fit with lung cancer. Instead, Dr Woodruff and his colleagues think bacterial or fungal infections such as chlamydiosis and aspergillosis are prime suspects. These respiratory infections are common in birds today. “We don’t know for sure if the infection was bad enough to ultimately do Dolly in.”

Dolly, with her long neck, had neck arthritis from a chronic cold. She thought it was allergies.

Coronoviruses are colds. We are have a pandemic of a really really nasty killer cold and a cold that is doing long term damage in way too many people. That seems hugely ironic to me. I thought it would be influenza. After flu nearly killed me in 2003 I read about it and have enormous respect for it. And influenza is endemic and is always circling the world, in the colder regions.

My ideas about allergies and asthma are changing. We define asthma by whether people respond to albuterol. I do not respond to albuterol so I do not have asthma. However, I respond to other adrenaline like molecules: coffee caffeine and terbutaline. So do I have an asthma like illness? My allergy testing in 2014 was resoundingly negative. I tested for celiac in 2020, because I just did not feel well. Negative. I have not retested yet, but even if that antibody testing is negative, it was gluten that flared up diverticulitis in me. The thing is, there could be other antibodies. Loads of them. We all make different ones.

I am thinking about tubulin. Tubulin powers our muscles and cilia and flagella. It is mitochondrial. We inherit mitochondria from the mother only: it is in the egg but not the sperm. Mitochondria is matrolineal. My son and daughter both have my mitochondria. I have a photograph of my maternal grandmother’s mother. Her expression is amazingly like my daughter’s expression when she is thinking. My daughter has my poor spelling skills, my attitude towards work, and her father’s muscular endurance. During college, her father’s goal was five sports a day. In high school my daughter said that she “just didn’t feel good” when the pool was closed. She was used to swimming 3-5 miles a day and lifting weights. Her father can get on a bicycle and ride at the speed of talking all day. He also has pioneered “jog golfing” in his area. When the golf course is empty in the winter, he plays golf and jogs from one hole to the next with his bag. Yes, he is nuts, I agree. I am jealous of that endurance.

The inheritance of antibodies would be from both parents, because they are made by the white blood cells. Do parents and children make the same antibodies or are they entirely different? I do not know that. I took an immunology course when I worked at NIH in the 1980s. I also had some immunology in medical school, but not nearly to the level that I am interested in now. I think I am hunting for a really good immunology course. And maybe more information about dinosaur medicine.

For the Ragtag Daily Prompt: thread. This post follows the thread of my thoughts this morning 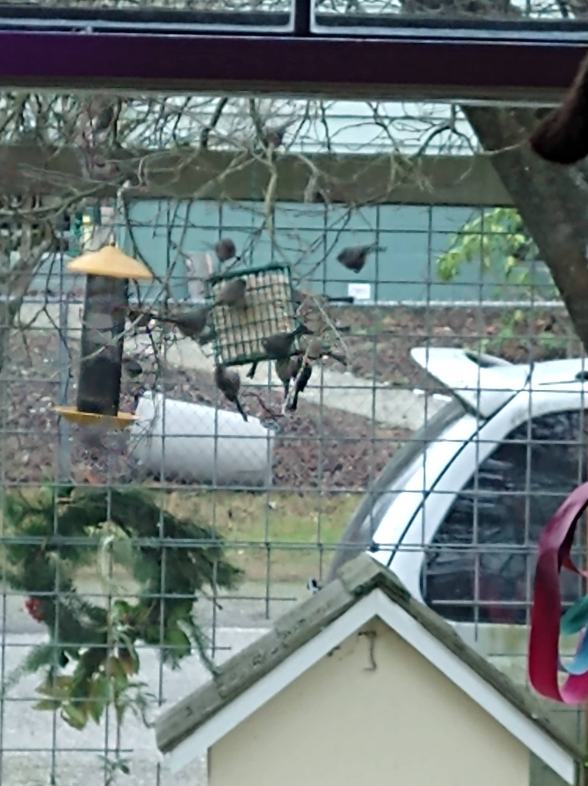 I took this through the window with my phone, so it’s a little fuzzy. Still, I love the flocks of bush tits when they come through.

For the Ragtag Daily Prompt scintillate.

My End of Life Plan and Wishes are as follows:

1. My plan is that my life should end after a half day of skiing for free at age 125 or older.
2. My wish is to ski quite brilliantly, smoothly and gracefully, though not as aggressively as at age 110 and below.
3. My plan is that other skiers will ask who that brilliant skier is and that all the lift operators will know.
4. My plan is that I will have a delicious lunch, with a glass of champagne, in a condo overlooking the slopes.
5. I plan to have a hot tub and then a massage from one of the many handsome men who flirt with me.
6. My plan is that I will sit in a comfortable leather armchair with my feet on a foot stool, while three of my male friends vie to be the one to bring me the second glass of champagne.
7. My wish is that I will not need any cosmetic surgery or false eyes or ears or teeth or joints or heart valves and will retain my spleen, teeth, gall bladder, appendix and brain in full operating order.
8. My plan is that I will not be on prescriptions, medicines, vitamins, supplements, medical foods, or nutraceuticals nor under the care of any quacks of any sort.
9. My wish is that my male flirts will all think that I am not a day over 75.
10. My wish is that I will be listening to live music, a woodwind quartet or string quartet, just dropped in to say hello, along with three of my great grandchildren, showing off their olympic ski medals, summa cum laude graduation documents, or Nobel prizes.
11. My plan is that after the quartet leaves, I will fall asleep….
12. ….and not wake up, and that though my attendants are sad, none of them throws themselves off the balcony over the cliff and are all surprised at my true age and at the bountiful gifts I have left to each of them with proof that a long life and compounded interest have excellent results. My children, grandchildren and great grandchildren will live long and prosper as well.

Just relax in the sun.

For the Ragtag Daily Prompt: layabout. 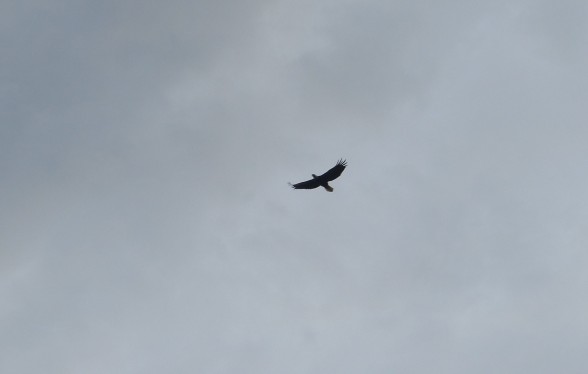 For the Ragtag Daily Prompt: akimbo.