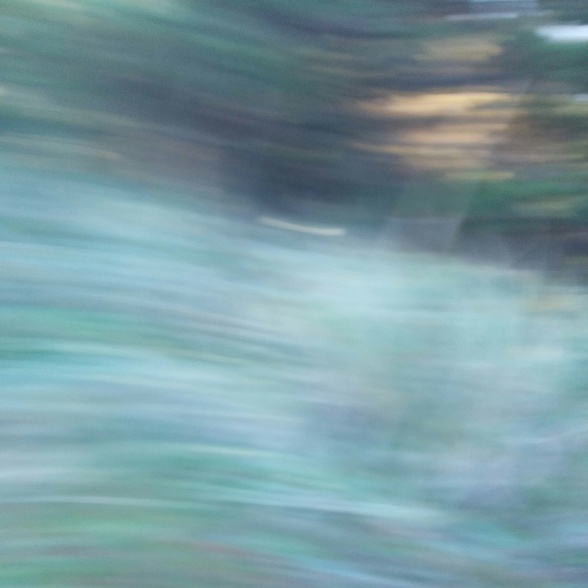 This is for photrablogger’s Mundane Monday 35. We were taking pictures at the beach over Thanksgiving and this was a happy accident. Yummy color….

This is for Ronovan’s Weekly Haiku Challenge #72, prompt words life and give.

They say they protect
life given by taking a
life, germ live alone

I am thinking of more than one definition of germ: an ovum and a sperm are germ cells, that could develop into an organism. When there is fighting and death over abortion I remember that the egg and the sperm are alive too separately. They can’t all live: we don’t have room or food, do we? And I was playing with more than one meaning and pronunciation of live.

1a :  a small mass of living substance capable of developing into an organism or one of its parts
b :  the embryo with the scutellum of a cereal grain that is usually separated from the starchy endosperm during milling

2:  something that initiates development or serves as an origin :  rudiments, beginning

I took the photo at our home swim meet.

and I thought dreamily that if all of the archetypes
are in each of us and I am learning to love all of mine
and even and especially the most horrific ones the ones
we all want to reject, not mine, the monsters, oh, poor monsters
that howl in the wilderness that howl in the dark that howl
to be loved

and I thought dreamily that if I love all of the archetypes
inside me then they aren’t a group that is around a table
in my mind, when they are all loved they come together and I
am one and everything is one

and I got up slowly

and returned to the world

We had a lovely dinner with family and friends. I look at the tablecloths and napkins that I have inherited and I am glad that I live in a time where I can work as a female physician and am not embroidering elaborate tablecloths and napkins. Some of the ones that I have WERE done by female relatives. Amazing and work that is currently not very valued.

So my centerpiece was an acknowledgement of the changes: Cindy is not going to ride in the coach. She has a canoe and paddles and a backpack, sleeping bag, stove, water bottle and GPS. She is going to find her own way and paddle her own canoe. 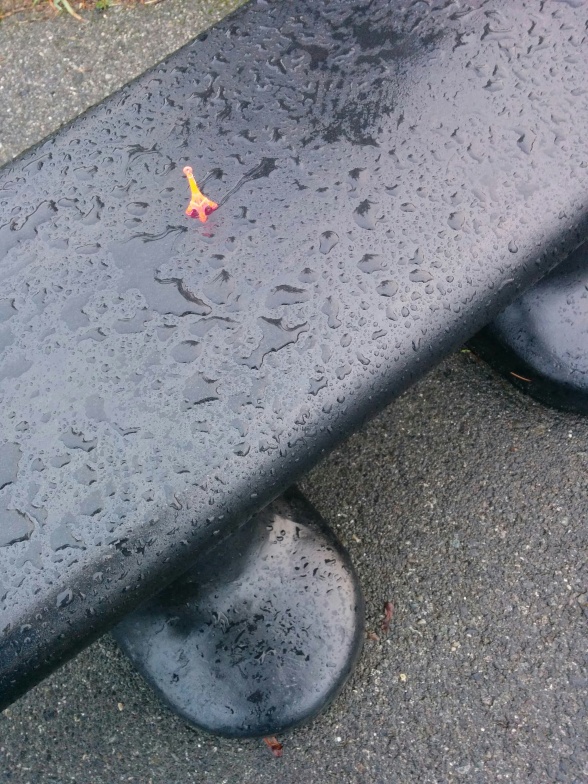 This is for photrablogger’s Mundane Monday #34.

I was downtown in the early morning for coffee and a walk. I walked out to Port Hudson. The wind was blowing very hard and the rigging was singing that eerie whistle wail. There are giant cleats out as both seats and advertising. I put one of my earrings on the cleat and took the picture. The earrings were my mother’s. After she died I looked at her jewelry. She loved little boxes and I was trying to understand the organization of the earrings. It was not by value, since plastic and gold were all mixed together. She was an artist and organized the earrings by color. These little plastic eiffel towers were in the box with red and pink earrings of all sorts. They are probably at least 30 years old. The tower looks so small against the black cleat with the rainwater. I hope that we can all care for each other through storms and fear.

My clinic refuses to fax to mail order pharmacies. Instead, I give the prescription to the patient and tell them to mail it.

I started this policy over a year ago, when five different patients called in the same week, about two mail order pharmacies.

Patient: “I called my mail order. They say that they don’t have the prescription and the doctor just needs to cal.”

So we refuse to fax to these companies.

Last week I saw a patient who had mailed her prescriptions. She did not get her medicine.

“I called the company five times. They told me they didn’t have it. They said to call you to send a “hard copy”. I said, “I mailed it to you myself on this date.” Then they said, “Oh, yes, we have it.” However she was out of her medicine for three weeks.

I said, “They saved the cost of three weeks of medicine. That is fraud.” I explained the scam.

Comprehension dawned on her face. “They do it on purpose?”

I shrug. “Five in one week seems like a business operation to me. I recommend that you write to the state insurance commissioner.

She said, “Next time I will mail it certified. And yes, I will call the insurance commissioner if they do it again.

The patient main insurance sends information that getting the prescriptions mail order will be cheaper, and so people want to use the mail order: but the mail order pharmacies in our area are saving costs by ripping people off and delaying prescribed medicine. I do hope they end up in jail: if we can’t jail the corporation, let’s at least jail the CEO and the top 4 officers.

I took the picture yesterday at sunrise. 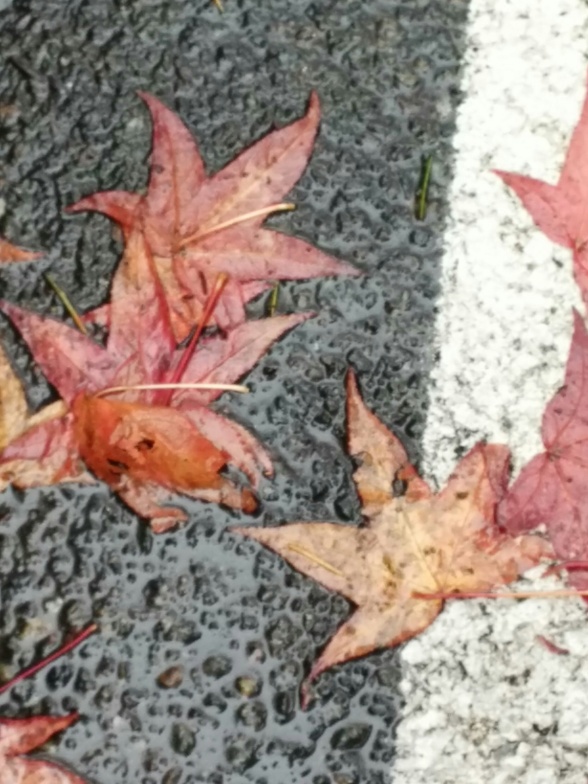 I took this photograph outside the Weyerhouser King County Aquatic Center, where my daughter was one of the many WA state high school swimmers. It rained driving all the way there, rained the entire time we were there and then rained on my entire drive back…

This is for Photrablogger’s Mundane Monday Challenge #33. Water again, but now the beauty of water and leaves and asphalt….

cover, shelter all
colors, would you harbor me
should be a cover

Sweet Honey in the Rock: Would you harbor me? https://www.youtube.com/watch?v=i0XBXJjoXJ4

I thought about cover meaning shelter and meaning the song, and the refugees needing shelter, harbor and cover. We are frightened and seek cover, shelter, harbor. Who do we have to harbor us but each other?

The photo is a synchronized swimmer in 2012. 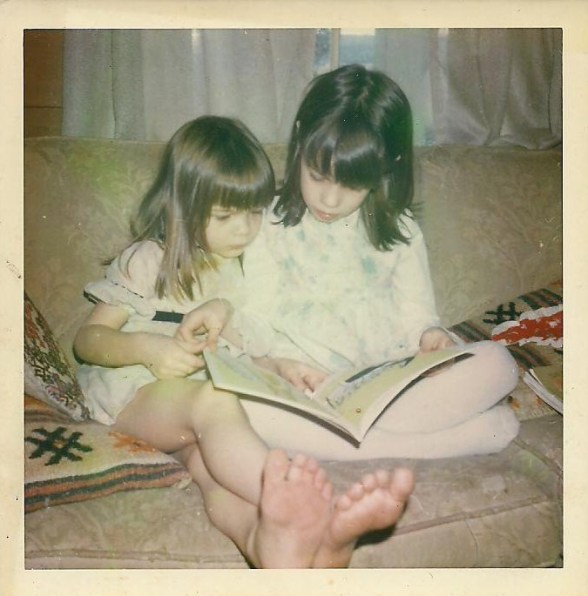 I am thinking about social cues for people with high Adverse Childhood Experience scores. With crisis brain wiring the response to social cues may be very different than what is considered the acceptable “norm”.

I always miss the cue when someone says “see you later”. I think “When?” Then I realize it’s a social comment and they do not in fact plan to see me later. I have a moment of disappointment. I do the same thing when someone says, “Let’s get together for dinner.” or “Let’s have coffee some time!” or “I will call you back!” or “Why don’t you come to our cabin some day?” Yes, I think, when?

And then I think “Liar.”

So I fail social cues….. or do I? Maybe I am not responding to the “correct” or “conventional” or “nice” social cues.

My father drank too much and especially while I was in high school and college. And my mother would enable and cover up and pretend nothing was happening. Children in this situation, which is way too common, develop special skills.

My sister was three years younger. As adults we discussed the stages of drinking and which one we hated most. We would both walk in the house from school with trepidation. In the door and almost feeling the air: what is happening? Am I safe? Do I need to hide? How dangerous is it? How much will it hurt?

I walked in once during high school and missed the cue. I was thinking about something. I thought my father was asleep in the kitchen. I went in to get something. I was very quiet so as not to wake him. I made a cup of tea.

He was not asleep, or else he woke up. And it was the worst stage, or the one I hated most.
Not physical violence. But he started talking. One of things he said was “You can tell me anything.” Now, he meant it. But he was crying by then and I knew I did not want to tell him anything and all I wanted was desperately to leave the room. And neither my sister or my mother was home. Finally I was crying too, because I said “I just want to go read my book.” and he was more crushed and maudlin and emotional and crying. And I tore out of the room and up to my room, as my mother walked in.

I did not cry much. Ever.

I refused to talk to my mother about it.

The next day she said to me, “Your father told me that you were talking about Lamont.” Lamont Cranston was a very beloved cat, The Shadow, who was missing now. Dead, we thought.

I said nothing. Because we had not talked about Lamont. So either my father was lying or else he’d had a blackout, didn’t remember and was making shit up. And if I told my mother the truth, she would back him and deny what I said or make it into a joke.

The stages my sister and I identified were:
1. sober
2. a little bit
3. goofy/silly/makes no sense
4. crying
5. asleep

We were ok with 2 and 5. I don’t think we saw 1 for years. We disliked 3 intensely, especially in public and especially when our mother was doing a cover up dance. And 4 we hated.
And yet I loved my parents and mostly miss them now that they are gone. Except when I remember things like this.

So, what is the point?

I miss “social cues” because that is NOT what the crisis brain, the ACE score brain, pays attention to. I am paying attention to far more intuitive things: body language. Whether what the person is saying matches what I know about them and what they have done in the past. I am looking for whether this person is telling me the truth.

I don’t trust instantly. Why would I?

I said to a counselor once that reading the “cloud” around the person was terribly useful in medicine but made me a social misfit. “I don’t know how to turn it off.” I said. She grimaced and said, “Why do you think I went into counseling?” She said, “I can’t turn it off either but I have learned to ignore it during social situations.” I was in my forties before I realized that there are people who don’t sense this cloud, who trust people until the person is dishonest, who understand that it is just fine to say “Let’s get together.” and not mean it.

Because actually, when someone says “I’ll see you later.” and they don’t mean it, they are saying an untruth. They are not planning to see me later. They don’t mean it. And my brain automatically files that under evidence that this person is not trustworthy. To them it is a social cue that is polite. To some of us, it is clearly something that is not actually true. I pick up on a cloud of social cues, but not the ones that are acceptable or conventional. And I am not the only one.