I tried a desk but the sky doesn’t lighten
windows on three sides, the orchids and I
await the sun, cat now on my lap

this table was my grandmother’s
my mother loved flowers
my daughter says “The laptop’s in the way.” 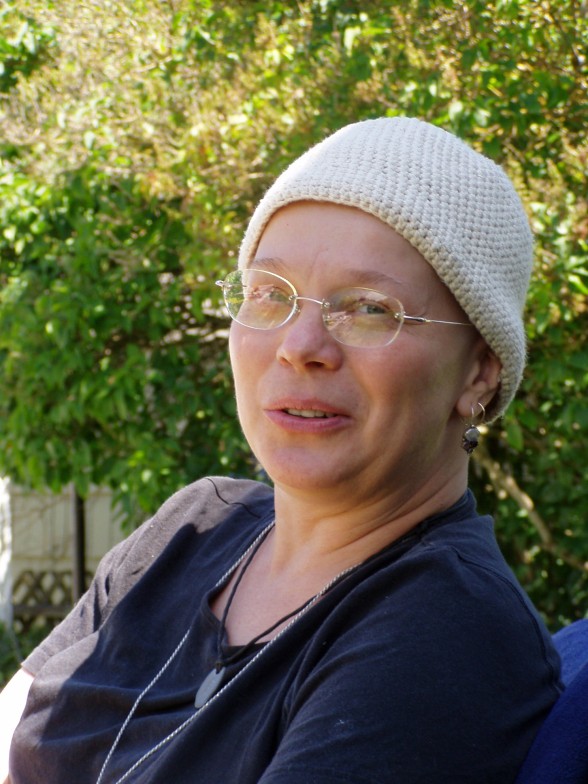 My sister in 2005, watching while our daughters play in the slip and slide. 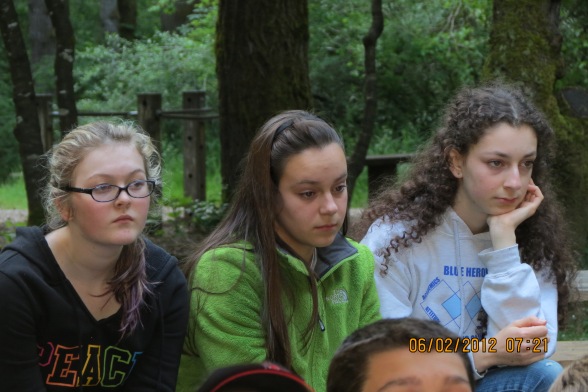 My daughter and two friends and schoolmates at Mount Saint Helens at the end of eighth grade. And what do you think is happening? Present, facing the speaker, yep, it’s a teacher going over the rules. Let’s get on with it. We know the rules. Face forward, mind might be elsewhere.

All taken in 2012 on the end of the year 8th grade trip to Mount St. Helens, to get the students together before starting high school. Huge thanks again to the teachers, the parents and the teens too.

My mother had plants all over a shelf running the length of their kitchen. She did a pen and ink drawing of the riot of flowers and pots and leaves. She then did a second one but this time the snapdragons were dragons and there were elves and fairies and monsters in all the plants.

My orchid is blooming riotously right now, with abandon, to the point where the pot barely stays upright. I love orchids, how long the blooms last, and how they would rather not be watered too much, and a flower that perches up on tree branches in jungles: how delightful and romantic is that? This one is in my kitchen window and makes me think of my mother.

For the Ragtag Daily Prompt: cottage.

My family has cabins on Lake Matinenda in Ontario, currently in a trust and jointly owned.

In 2012 my sister died in March. In August my daughter and I went to the lake. No one could bear to stay in the cabin that she had used the most the last few years. My daughter and I spent a day facing the mice and clearing. The mice had made nests in anything they could use.

My daughter helped me and bless her. I was still feeling paralyzed with grief. We garbaged bagged the mouse nests, went through all the fabric, loaded the trash, recycling and empties into the boat and took them to the dump and to town. Then we bought half a dozen plastic containers and put every fabric thing and shoe that didn’t have a mouse nest into containers.

I went back this summer and a friend and I worked on the roof. The books and the glass containers are sad now, not doing well as no one has used that cabin since 2010. I didn’t think to box up the books, except for the log that my mother started.

This summer my daughter and I took four large containers in the boat and then by car to the laundromat. We washed everything and donated most of it to a local second hand shop. I put a wool blanket back in a container and moved some of the dishes my mother made in another container to a cabin that is in better shape.

Our cottages are full of memories.

I took this on Friday morning. The sky was so glorious and changing, a water color in transition. My mother painted watercolors and when I see a sky like this, I wonder if she is up there with a brush. Sending love in this season for everyone who is missing someone.

My son is an extroverted feeler and my daughter is an introverted thinker.

One day he came over and was obnoxious and rude. I got angry and yelled and threw him out. I slammed the door after him. I didn’t usually do that and it felt both good and bad.

The kids were conferring. I wondered if I’d scared them, losing my temper. They both came to me.

“Mom, we don’t want you to yell at dad and make him leave.” said the EF, arms crossed. The IT stood beside him. “And no slamming doors.”

“But he was rude first!” I said, realizing as I said it, uh, lame. And where have I had this conversation before?

“We know that he was rude. But we aren’t talking about him. We are talking about your behavior. We don’t care what he does.” They both looked stern and fierce.

“So I have to behave no matter what he does.” I said. They nodded. “You are right. I apologize for yelling at dad, throwing him out and slamming the door. I need to behave anyhow. That’s what I tell you, right?”

“Yes, mom.” And then they both hugged me to comfort me.

I felt sheepish for behaving badly, but mostly proud. Proud that my kids felt comfortable confronting a misbehaving adult and the one with whom they were living, me. Right after a yelling tantrum, too. And proud that they were giving me back the message that I’d given them for years: I don’t care what the other kid did, that is not acceptable behavior. And overall I felt pretty good that I really had not yelled and slammed doors very often: we’d done the majority of our fighting in the counselor’s office and had tried to make it very clear that it was not the kids’ fault.

The photograph is of my son in Thailand. He was a Rotary Exchange Student, to Trang. I don’t know who took the photograph.