This is for Ronovanwrites weekly haiku prompt challenge #85.
The prompt words are tight and warm.

I took the photograph last year during sunrise on my street.

This is for Photrablogger Mundane Monday #47, a visit to Tacoma to see one of our high school girls take second in state wrestling and a walk to the Museum of Glass and the Chihuly Bridge of Glass. It was a beautiful day!

A much more comfortable bridge on the Staircase hike than the log in a previous post. The water is high and fast and pale magical green.

I can’t find a source for this: “The older I get, the more I learn, which bridges to cross and which to burn.”

Doesn’t seem wise to burn bridges when rivers are flooding. But the bridge could wash out anyhow and then I would need to wait or go another way or build a new one.

The last time I visit my sister in hospice, my cousin is sitting by the bed when I arrive.

My sister looks terrible and like she is suffering. She is in renal failure and her eyes are slitted against the light. She is in a hospital bed and barely eating. It takes me three days to figure out how to make her comfortable.

But when I first arrive, I say hello and hug her. She laughs and it is dark.

I start singing a lullaby: I gave my love a cherry.

She shakes her head: no.

I study her. “How about Samuel Hall?”

She smiles and nods.

Another song to raise girls. We adored it, because it is unrepentant, horrible and had swears.

My cousin’s eyes widen. “I haven’t thought of that song in years.” he says. He starts singing along, remembering.

My cousin has two children. I guess he is not raising them with the dark songs we were raised with….

My sister is smiling, eyes slit against the light, angry.

To the gallows I must go
With my friends all down below
Saying “Sam, I told you so.”
Damn their eyes

I see Nellie in the crowd
I am shouting right out loud
I shout “Nellie, ain’t you proud!
Damn your eyes!”

“Let this be my parting Nell
Hope to see you all in Hell
Hope to Hell you sizzle well
Damn your eyes!”

And my sister laughs and then she sleeps for a while, angry, angry at death.

This is not the suffering photo. I can’t bear to post that….

This is the Staircase hike on Monday. It was not slick enough to make me turn back, but if the water had been higher or there had not been a railing, I would have turned back. I thought about rising water on that hike.

And the same day, I received a county email that an 18 year old slipped crossing a creek and was swept away.

Love to his friends and family and I am so sorry.

I hiked yesterday at the Staircase Rapids in the Olympic National Forest. The water was very high and a delicious green. It rained gently the whole time, but that only added to the green and the happy mosses and lichens….

This is for photrablogger’s Mundane Monday Challenge #46. Boa Cat eschews all commercial cat scratch posts and blankets and containers, but she likes to lie by me in the early morning when I write. I took a box and put one of my fleece jackets in it. Purrrfect. She curls up there in the morning and I can move the box easily. She likes it best on the table in the middle of everything so that she can watch when I leave for work.

Next I will decorate the box… I need some beautiful paper for Boa. 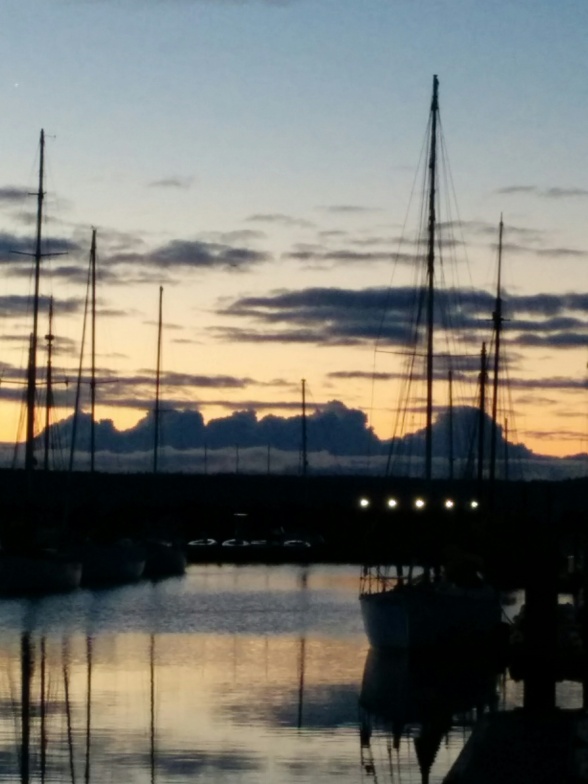 I took this in the early morning last week. I love all the layers of water, reflections, boats and sky….

This is for the RonovanWrites weekly haiku challenge #83. The prompt words are flame and gem.

We all go through times that feel difficult and we feel pressure. Think of a diamond and endure.

Donald on Dining in and Out.

This Girl's Got Curves