On Sunday I go on a long hike with my visiting son and daughter, out North Beach. We see three eagles in trees and then the reason. A dead octopus on the beach, large. A sea gift of protein. Four more eagles and other birds soared while people were close. Returning, this juvenile bald eagle is on the beach, happy with this meal. The speckled feathers changing from juvenile to adult are quite gorgeous. I want to go in the sea and meet our giant pacific octopus, too, some day. 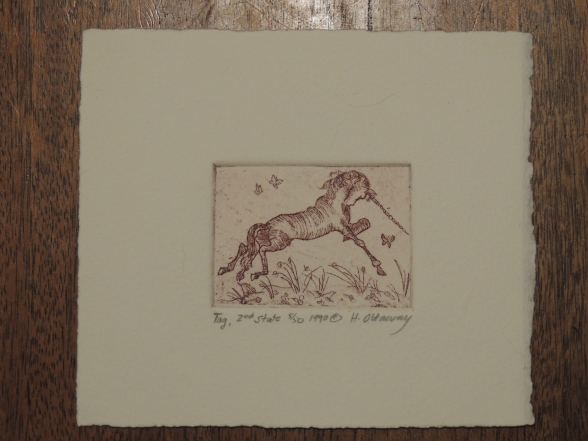 For the Ragtag Daily Prompt: timely.

My mother died in 2000 and my father in 2013 and my house is full of art. My mother was a prolific artist and I am working on placing, gifting, cataloging her art. There is rather more than I’d seen. Watercolors and etchings were her most loved, I think, though she did woodcuts, silk screen, oils, pottery and all sorts of crafts.

She did tiny etchings, often 2 by 2 or 2 by 3 inches of fantasy creatures.

With both my parents dead, I am so grateful to my aunts and uncle for stepping in. My aunts told me “We are your mothers now.” With my son and his girlfriend living in Maryland, both aunts and my uncle are in Virginia.

The beautiful gifts are from my uncle. He makes them in the shop at the retirement community. We got a tour. He’s currently making a cherry headboard for them.

When I took his picture he said, “Watch out, you’ll break your camera!” But I don’t think so. Thank you, uncle.

For the Ragtag Daily Prompt: family.

My daughter and I are out visiting my son and his girlfriend on the east coast. My son wanted ideas for Christmas, since he and my daughter know I have enough stuff. I suggested tickets to something: a play, music, something in the DC area.

They took us to Georgetown on Sunday and we did an escape room! We were in the prehistoric one and solved it before the one hour timer. Lots of clues and math and letters! It was great fun! We escaped being eaten by solving all of the clues and leaving the escape rooms, hooray!

We had a lovely Thanksgiving.

My daughter precleaned and neatened the kitchen. We shopped in the morning after choosing the final menu. We made stuffing together. I did the turkey. She made garlic mashed potatoes, carrots and a really delightful cranberry sauce with cayenne. I made the gravy, brussel sprouts and celeriac and our friends brought two beautiful pies! Apple and pumpkin!

My daughter set the table after trying multiple tablecloths. She also washed pans and bowls as we cooked. Our guests helped with cleanup as I dismantled the turkey. Turkey broth is done this morning and they left us pie. Pie for breakfast and all cleaned up!

Have a delightful day and rest of the weekend.

For the Ragtag Daily Prompt: shop.

The main thing I am going to shop for today is a little tag that I got at my Sunrise Rotary yesterday. This is a gift request for a child, part of Christmas for Children, run by our local Kiwanis. Here: Port Townsend Kiwanis.

Applications for gifts for children are here: https://www.christmas4children.com/.

This year, Christmas for Children is not only handling Port Townsend requests, but Chimacum and Port Hadlock and Quilcene.

A friend just remarried and he says that they are comparing stuff. They have two of many many things! Kitchen items, house items. Maybe as a wedding gift we should all offer to go choose between two of the things and take one away to donate to someone in need! All those decisions!

My sister and I were blessed by the gift of connection to outdoors. To forest, lake, field, desert, prairie. I sleep better in a tent on the warm earth than any house, ever. When the world is too much with me, or the news is too awful, or a patient dies of ovarian cancer and is younger than me….

…..I walk on the beach, in the forest, in my neighborhood. I sing back to the birds. I speak chickadee well enough that they perch on a branch close by and sing back. Or argue, perhaps. Swinging on a branch.

Outdoors is my church, my solace, my love, my connection with the earth, with nature, with the Beloved. Air, water, fire, earth, wood…. home is outdoors.

A friend bought a house in Portland, Oregon. Last spring he was redoing the yard: all edibles.

“Wait,” I say, “what about the roses? Didn’t you say there are roses?”

I visit in Portland and drive back with three roses, roots but not much dirt, in a plastic bag. I think two are red. I plant all three in my front yard, with the deer fence. As high is is legal.

And here is the first bloom: an immigrant to Washington, a transplant, another color, a surprise! Lovely!

For the Daily Prompt: mope.

Mope. We think we should not mope. Go down, be down, downer, don’t go there… but sometimes we have to let ourselves feel, and feel deeply, even if it’s not the popular feelings.

I was grumpy four days ago driving with my daughter for a skiing vacation. She gently told me not to grump at her. By the next morning it was clear why I was grumpy: an awful cold had come to visit and I was not going to ski. And I probably got it from her, but maybe not, and it doesn’t matter. I moped a little, but was mostly proud that I rested for two days and did not try to push through it, power through it, feel the burn…. I’ve done that too many times and then gotten really sick. I rested for two days and slept for twelve hours daily and moped a little. And yesterday I did ski for part of a day. Then we drove home, my daughter driving most of it, and I hurt all over by the time we got home….

If every feeling is a gift, a visitor, sent from the Beloved, as Rumi writes… welcome them all. This body is a guesthouse, says Rumi. Welcome moping and treat it gently and with kindness and understanding, as we all long to be treated….

I am practicing slow medicine, just like the slow food movement.

It took a year to set up my clinic, because I wanted time with people more than anything. And how could I do that?

Low overhead, of course. The lower the expenses, the more time I would have with patients.

I did math and based it on medicare. I estimated what medicare would pay. I dropped obstetrics, can’t afford the malpractice and anyhow, the hospital was hostile by then. That cuts malpractice by two thirds. And I chose not to have a nurse, because people are the most expensive thing. Just me and a receptionist. And a biller once a week and a computer expert who rescues us when we kill another printer or need new and bigger computer brains for ICD 10.

My estimates were on target except that it took three times as long to build up patient numbers as I thought. Ah. Oops. I was advised to borrow twice what I thought I needed and that was good advice, because I had not counted on my sister dying or my father dying or me getting sick for a while…. but so far the clinic remains open.

Slow medicine. I schedule an hour with a new medicare patient or anyone new and complicated. People who say they aren’t complicated are lying, but we schedule 45 minutes for them. And for the really complicated, we have 45 minutes for follow ups. Most visits are 25 minutes: the only visit that is less is to take out stitches.

What does slow medicine allow? In the end it allows people to speak about things that they don’t know they need to talk about. A friend dying. Fears about a grandchild. Family fighting. The dying polar bears. The environment. This difficult election. And sometimes I think that freedom to speak about anything is the most theraputic part of the visit.

I had one woman last year who established care. Complicated. I think she was in her 70s. And the medical system had made mistakes and hurt her. Delayed diagnosis, delayed care. But she was laughing by the end of the visit. She stood in the hall and said, “This is the first time I can remember laughing in a doctor’s office. This is the first time in years that I can remember leaving with hope. And you haven’t DONE anything!”

….anything, except give time and listen.

Rantings Of A Third Kind

The Blog about everything and nothing and it's all done in the best possible taste!

Sgeoil
Chronicles of an Anglo Swiss

Welcome to the Anglo Swiss World

The Journey of My Left Foot (whilst remembering my son)

I have Malignant Melanoma, my son had Testicular Cancer

Photos of my world and other stuff I hope you will enjoy too. Photos taken with Canon PowershotSX70HS Photos can be purchased.