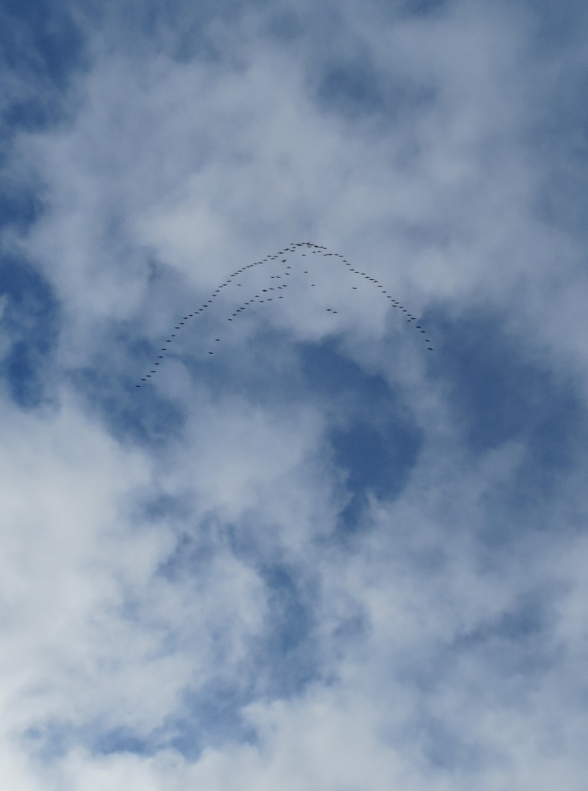 A friend comments that the country used to outnumber the city folk but now it’s the other way around, and that the split in our country is about values.

Hmmm. I am thinking about that. I am a city girl AND I am a country girl, both. We moved every 1-5 years and I was in cities and in the country. However, my family also had two anchor points. My mother’s family has shacks on a lake in Ontario, summer shacks. My father’s parents had a house on the beach in North Carolina on the outer banks. Wind and water in both places and we never watched tv in either place, because we were outside until we fell exhausted into a tent or into bed.

I don’t agree with my friend. I think we ALL share some values: that no one should go in a school and shoot kids, or a church and shoot people, or a store and shoot people. Right? We all agree on that if we are sane. That is a starting point. I read the mediation books when my (now ex-) husband was getting certified. The mediators start by trying to find the common ground.

I am pretty much equally comfortable in my small town, the woods, on the water and in cities. My friend warned me about Seattle being dangerous now. Well, it’s a matter of scale. I went to high school in Alexandria, Virginia and I lived at 3rd and Massachusetts in Washington, DC back in the 1980s. I was pretty careful just walking to the metro in that part of Washington at that time. I pay attention in Seattle, but in these cities I know what I am paying attention to. I ended up alone on a metro car once at night. A man got on at the next stop, looked around the car, grinned and came and sat next to me. I thought, oh, Sh-t, this is not good. I ignored him and continued staring at my book.

I shut the book, stand up, and he lets me pass. I stand by the metro door until the next stop, get off that car and get on another car with more people. The car did have emergency alarms, so I could have hit one, but he let me by so I didn’t. I was kicking myself for being alone on the car, but honestly: what a stupid nasty male chauvinist threatening jerk. I shouldn’t have to worry about this crap. But after that, I didn’t get lost in a book on the metro because I had to pay attention to avoid being alone on a car. Annoying as can be.

My friend says he gets lost in cities. I don’t. I start building a map in my head when I arrive in a new city. It is completely automatic. If I am driving, it’s based on the highway. If it’s by airplane, it includes the airport, the hotel, the conference center. I have been to San Antonio once, but I stayed at a hotel along the River Walk and the conference center was towards the center and south. I could draw part of the city, still. I love maps!

I can’t say that I would be comfortable if dropped in a city in another country, necessarily. I was pretty happy on my trip in March, which was abroad. There are levels of familiar and what are the languages in common? Are there any?

What are these values that people might be split on? I read that people are polarized and can’t get along, but I don’t agree. I did Family Medicine in this town of 9000 for 21 years, and I had people from town, from the county and eventually from three other counties. I had nine people who had to take a ferry to see me. Talk about inconvenient for them. My people are all races, all genders, age zero to 104, all different stripes of politics. I don’t care what their politics are: I am there to see if I can maintain or improve their health. This could mean anything from encouraging exercise, doing a pap smear, diagnosing diabetes to discussing hospice and end of life issues or telling someone that I do not think they are safe to drive. This is not about “pleasing” people: recognizing opioid overuse in a person does not endear me to them. But it is about doing the best I can for people and with people. And isn’t that a value we all share too?

Now we have common ground, two areas to stand. Grow that space. Peace me, work for justice and kindness and peace to you.

I wrote this essay in July 2017. Before Covid-19. It is clear that Covid-19 is also causing a walking pneumonia. People are exhausted when they get out of bed. No fever, they may not cough much, but if they get up, they can feel exhausted. The key to this is the heart rate, the pulse. If the pulse jumps 30 points faster or more, this implies lung swelling and reduced lung capacity. Right now, the only treatment we have is rest and time to heal. I should know, I’ve had really bad walking pneumonia four times: the first two times I was out for two months. The third time 6 months with 6 more months half days and chronic fatigue. The fourth time put me on oxygen.

I want to offer hope to the people with Long Covid-19. Having been through four bad pneumonias, with increasingly long recovery times, and now disabled for doing Family Medicine, I have experience to share. I will write more about that in the next essay.

From 2017: Walking pneumonia is changing.

mycoplasma pneumonia
chlamydia pneumonia (this is not the STD chlamydia. Different one.)
legionella
pertussis (whooping cough)

However, streptococcus pneumonia can also be a walking pneumonia OR a lobar pneumonia. In a lobar pneumonia the person usually is short of breath, running a fever of 102-104, and they point to where it is: hurts in the right upper chest. On chest x-ray there will be consolidation: whited out from fluid or swelling instead of nice ribs and dark air. They are often tachycardic and hypoxic.

In walking pneumonia the person often has no or minimal fever, they just feel tired or short of breath when they do things, and the chest xray can be “clear”. It isn’t really “normal”, it’s just that the bacteria or virus affects the entire lungs and causes some swelling throughout and doesn’t white it out.

“Double” pneumonia is when the chest film is whiting out on both sides. We also see the lungs whiting out with ARDS — acute respiratory distress syndrome. So after trauma in a car wreck and lots of broken ribs, the lungs can be bruised too and white out. Ow. Influenza virus can cause lung swelling and in the 1917-1918 flu infected military recruits lungs were swelling shut. They would turn blue and die.

“My” strep that I’ve had pneumonia with twice is streptococcus A, not strep pneumonia. It causes strep throat mostly though it can invade and cause sepsis or pneumonia or cellulitis. There are currently 4000+ known strains of strep A, and some are resistant to antibiotics or can cause kidney damage or do all sorts of nasty things. I think that “my” strep is resistant to azithromycin.

The current guidelines say to treat walking pneumonia with azithromycin. However, a paper came out this year saying that resistance to azithromycin is rising among streptococcus pneumonia and that nearly 50% of strains tested were resistant. Uh-oh. That means that azithomycin doesn’t work and the person can get sicker and may die. I talked to a pulmonologist in Seattle when I needed help with someone. He said that he would have said there weren’t any resistant strep pneumo strains here in Washington except that he had one intubated and in the ICU right then. “I’m convinced now, ” he said.

A lobar pneumonia is easier to diagnose. Abnormal chest x-ray, reasonably healthy people run a high white blood cell count (so my frail folks, immunosupressed folks and 90 year olds don’t raise their white blood cell count), and a fever (ditto) and look sick. The walking pneumonia people come in saying they have been coughing for 3 weeks or 4 weeks or two months. I am doing more lab testing because of the resistance.

This winter I have seen 6 different causes of walking pneumonia here: influenza A, respiratory syncytial virus (In more than one person over 60. That is NOT who the books say it should affect. It’s supposed to mostly cause bronchiolitis in babies and preemies), pertussis, strep pneumococcus, strep A and none of the above. All looking pretty much the same, but with different treatment. 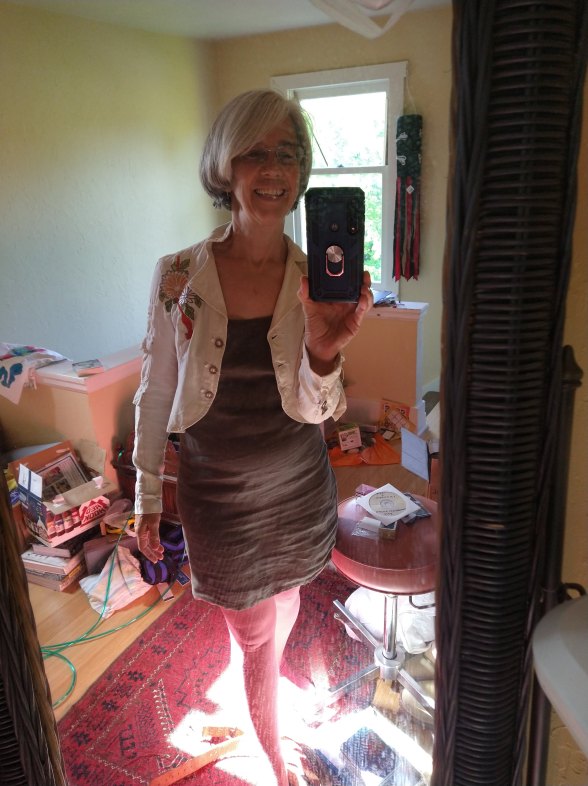 I took this May 31, 2022. I was still pretty sick with pneumonia and needed oxygen to do practically anything. I had dropped ten pounds the first week of being sick, March 20th. In 2014 it was six months before I could return to work and then only part time and exhausted. So I knew I was likely to be in for a six month haul. I hadn’t figured on needing oxygen, but it made me feel so much better and be able to think again!

Anyhow, I was entertaining myself by going through my closet and putting on things that I did not wear to work. I like the sun lighting up my legs in this photograph. The dress is shorter than it looks and the jacket has tags in Japanese and is a soft woven silk. I thrift shop by feel, because silk and mohair and cashmere and wool and cotton feel so wonderful.

Later the same day, I took this photograph:

I would wear out very quickly during the day. Today it is pouring here and last summer by now it was much much warmer! The sun made my lungs hurt less.

For the Ragtag Daily Prompt: kooky. 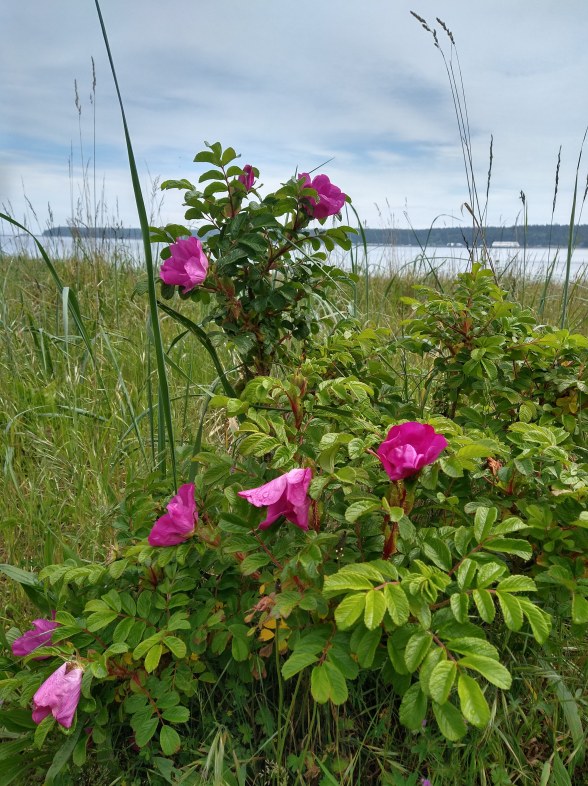 This rose is on Irondale Beach. It is standing wild, but the blossoms are 5 inches across and it is such a vivid color. I do not know if it is wild or not.

I have read the Louisa May Alcott book, Rose in Bloom. I loved the clearly stated ethics in those books when I was little. As if there were rules and they could be learned and followed, even though I knew that the real world was much more confusing and people were much more mysterious.