who snew the temperature would snow melt?
icy drips and drops from trees pelt
my cat on leash slips grumpy fur felt
my vote is cast against gilt hair hell bent

Who snew that science snews would soon die?
fentenyl kills like a drive by
kills more than heroin or meth, oh my my
science silenced while liars cry die

Who hopes for sanity not war?
who casts a vote to help the poor?
who snows the prophets words once more
are used to profit from human gore

The CDC has a new set of recommendations for chronic pain.

I will write about them. I have to read them first. Hurts too much, right now, the election, and all the pandemic fighting. Stress people and you see what they are really like.

My church has melted down into a huge fight. I was in a chorus singing instead of being in a meeting. Apparently there is a group that says brown people have “taken over” the national organization of the church. Um. Hello. That is discrimination. Does the color of the skin matter if it is a good leader? Why are people insane? I filled out a county survey on drug use today. I know we have methamphetamines and heroin in our high schools because patients have told me. But then I get to the race question. What race am I? I checked OTHER and wrote HUMAN. The race bullcrap is NOT SCIENCE. I haven’t done any genetics testing. I DO NOT KNOW WHAT RACE I AM THOUGH I LOOK WHITE.

It is important for medicine in that there is proven discrimination with less screen health services offered to “brown” people, whatever the heck “brown” people means. I wish the heavens would turn us all the same color over night. Or perhaps blind us. That is not nice of me and I do not care.

I am glad that this horror came out in my church. Because now the discrimination is out in the open. And the committee has sent out a message saying NO. We WILL stay part of the national organization. We WILL not give in to this discrimination. AND I SAY HOORAY AND BLESSINGS ON THEM.

Here is the new CDC set of recommendations for chronic pain: https://www.cdc.gov/mmwr/volumes/71/rr/rr7103a1.htm . You can read them yourself.

Part of me is horrified and part of me is calm. Because pain is a part of life. Pain, love, joy, fear, it’s all part of our emotional evolved systems to survive, right? If God is love, God is also pain and fear. It is not a split. It is both.

This song is a love song. But to me, it’s a love song from heroin to a woman. One lovely day, a place where there is no pain. There will be pain on the return, the withdrawal. I have patients say, “You need to get me pain free.” My reply was “I will not get you pain free. Pain free is dead. Or at least, they can no longer tell me if the next form hurts.” In this song, “she won’t let on, that the feelings have got so strong.” Addiction, opioid overuse.

I took the photograph of Elwha yesterday. He is my relaxation mentor. 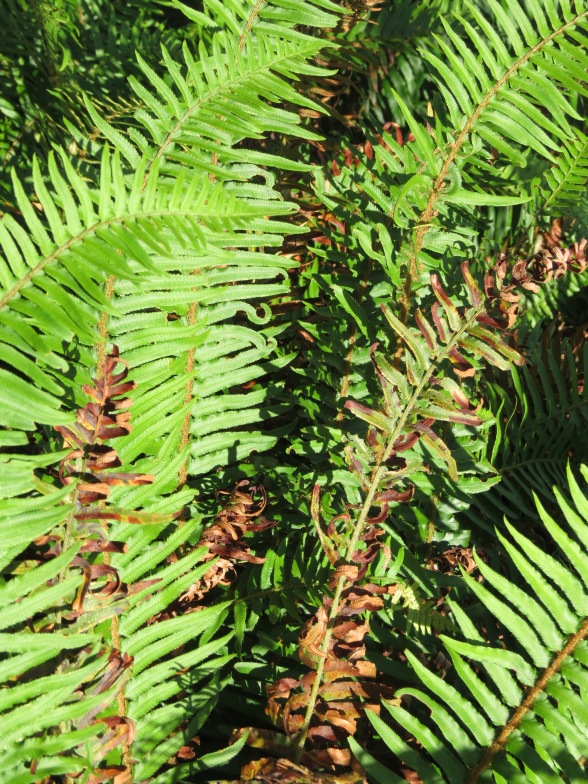 For the Ragtag Daily Prompt: fern.

This was right before Mr. Trump was elected President.

A friend was working on my boat. He said that if I paid in cash, it would be less. Because, unspoken, he would not report the income. I thought about it. I said, “My medical practice is mostly medicare and state insurance. That is paid for out of our taxes: yours and mine. Therefore I am giving you a check and I don’t care if it costs more.”

There is a big culture here of not paying taxes. Cheat the government. Pay cash to each other, nod, nod, wink. It is tempting, takes a percentage off what I pay. But…. the people who I know are doing this are mostly conservative. They say drain the swamp. They say the government is cheating us. But THEY are cheating all of us.

I asked my cousin why he and my maternal family believed a story masterminded by my sister. That my father and my neice’s father and I were villains. One of the villainies was the our grandmother’s money had paid for MY graduate school but not my sister’s graduate school.

But that is not true. My grandmother paid four years of medical school tuition. 21K. I paid my own loans.

After my grandmother died, and then my mother died, my father used “my grandmother’s money” to pay off my sister’s graduate school loans. 36K. My parents also cosigned on a house, that my sister walked away from. They wrote 30K off thier taxes that year selling it. My father bailed her out of 7K on a work credit card. My father called me crying when she bullied him out of another 30K for another house. And that is when I said to her ENOUGH. I refused to visit for a year: until she went into hospice for her cancer. I visited three times while she was in hospice. We made peace. But she did not tell anyone else the truth.

I said to my cousin that I could send the bank statements showing that my father paid for my sister’s graduate school. That is when he said, “No. We want to believe what we want to believe.”

I thought really? So you want to believe my sister because she is dead. We will not speak ill of the dead, so you are ok with me and my father and my niece’s father being villainized and you will not even look at the lies.

VOTE and VOTE against FEAR, SHAME, DISCRIMINATION, ANGER AND GRIEF. We have to stand up. I loved my sister even when she was dishonest and bounced 1000$ worth of checks in my small town with people I knew. My father got threatening phone calls and he paid. That was the last straw for me.

So guess which politician stirs up fear and hate and discrimination and anger and grief? Well, honestly, both sides are guilty of that, but I stand against discrimination. We all shall rise up.

Love and Blessings and Peace you.

The photograph is on one of the last three visits to my sister. She died in March 2012.