My sister freaks out once. “Oh, my gosh. Our parents still have boxes from their last move a decade later. What will we do when they die?”

Me: “Get a storage unit and open a box a year at Christmas for the rest of our lives.”

I tell my sister that we could start a magazine in response to Real Simple. “We will title it Playful Packrat.” We come from an impressive line of Packr– I mean, Collectors. Collector is honorable and respected. Packrat is, well, unfashionable. Perhaps I should title it Circumspect Collector instead. I know someone who seems to be collecting heavy equipment, which is an interesting choice. One needs more property than I have for parking.

My house would make Marie Kondo shudder. The photograph is the basement: the stack is my mother’s larger artworks. I am moving stuff around now that I am home-on-oxygen instead of running around clinic like a crazy rabbit. And like this writer, https://www.architecturaldigest.com/story/maximalist-response-marie-kondo-minimalist-mandate, it ALL gives me joy. Well, ok, not the tiny ants. We are at war. My kitchen may be cluttered but by gosh it’s clean clutter because the tiny ants let me know immediately if I screw up.

Anyhow, my mother died in 2000, my sister in 2012, and my father in 2013. My parents left me their stuff and grandparent stuff, some of which I had never seen, and I still get dead people mail. The colleges and universities are the most persistent. They don’t care if someone is dead, they still mail out the Alumni Magazine. I get U of WI, Cornell, Princeton, U of Oregon, Medical College of VA, OHSU and Williston. Holy moly. U of TN and SUNY Binghamptom have lost track of us, thankfully. I wish I had kept my father’s notes on Beowulf and mailed them to Williston for their library. It would be a sort of just revenge. I still have boxes (my excuse is busy physician) so I will bet that I can find something to mail to each one of those places. Something that they want just as much as I want their Alumni Magazine. With a cover letter that says that my contribution is hidden in the documents. One dollar each.

I have too much stuff but I have now turned middle aged, that is, I am over sixty. So I now am on the downward side and decide, there needs to be outflow rather than inflow. I like my stuff but it’s time to start moving it. My mother was a prolific artist and all of the silent auctions in town will now be blessed by her art. And don’t worry, it is not awful! She has art in the Smithsonian, the National Museum of Women Artists, and a bunch of other places. See my April A to Z for details.

For my father it was books and musical instruments. I still have the guitars. I think there were twelve trumpets? A lute, a harp, a cello — the lute is in very bad shape and the others have gone to someone else and the school, respectively. Recorders, gone. I have flutes, my regular flute and then ones made out of clay, cherry, pvc pipe and bamboo, as well as a Native American flute. I am mostly playing the regular flute, Native American flute and guitar.

I am guilty of books, too. I DO want to read them all, but even if I did nothing but read for the next sixty years, I might not finish. The excuse that some are reference does not fly. Some are pure unsullied entertainment and by gosh, I am keeping those! I am not allowed to go to the book sale next week. I do have a library box but the books are not leaving at the rate they have been arriving in the last year. And it’s my fault.

Anyhow, I am enjoying my clutter. After all, we invented tables to put things on. Sometimes we do have to clear the table for the NEXT project, but no worries! There is always the floor! 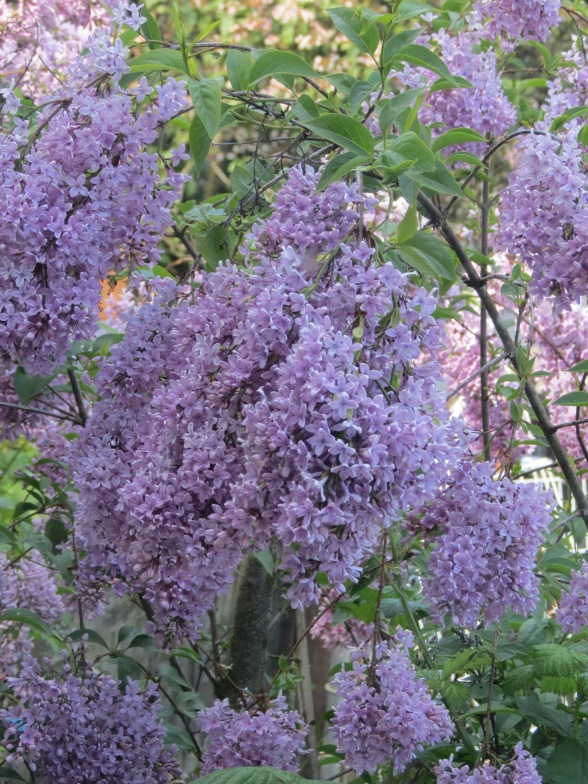 My lilacs are just fabulous this spring, generous, wanton and excessive. I think they really like the excessive rain we are getting this May. Do we get June flowers from May rain?